Everyone has heard of anime like Blue Exorcist at some moment. Nothing says getting warm like grabbing a blanket and watching anime Blue Exorcist (Rin’s flames help too). Blue Exorcist is an anime featuring Satan’s son Rin Okumura. He recently discovered this and decided to become an exorcist and defeat Satan.

Everyone has heard of Blue Exorcist at some moment. Seven years ago to last year when a second season confirmed. If you’re like me, it isn’t enough, though. You liked/loved the storyline and wanted more. Fear not, as here is a list of anime similar to Blue Exorcist!

Now, let’s get this clear. This list isn’t going to be listing every single theme from Blue Exorcist. They are only similar based on some plot points, articles, etc. We don’t want a Blue Exorcist wannabe copy in here, do we? 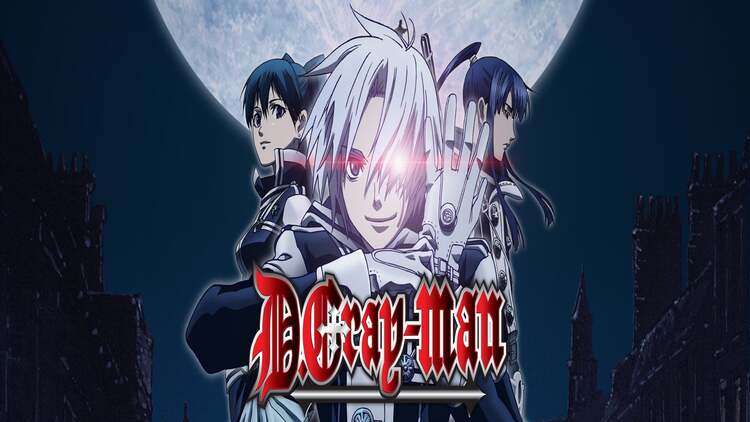 D.Gray-man follows Allen Walker, a fifteen-year-old who plans on becoming an exorcist. To stop Millenium Earl, who wants humanity dead. Allen joins the Black Order, an organization of exorcists. Their goal is to defeat Earl, which comes with the task of defeating Akumas.

Allen has a cursed eye that gives him the ability to detect disguised Akuma. Making him an irreplaceable member of the Order. He has to recover pieces of “Innocence,” which can used to defeat Akuma. Let’s say Earl won’t let things end.

Similarities: The main characters, Rin and Allen, both aim to be exorcists to defeat a greater evil. They are both cursed in a sense. Rin cursed with being Satan’s son, and Allen left with a cursed eye.

With a similar storyline, the characters aim to use their abilities for the greater good—no matter which obstacles stand in their way. 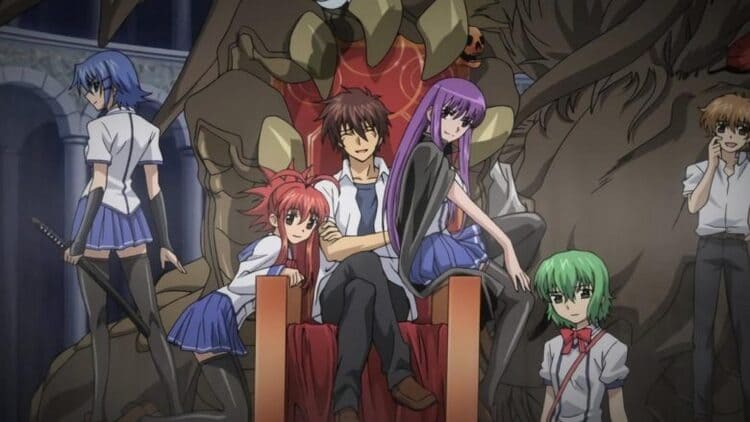 The story follows Akuto Sai, who recently transferred to Constant Magic Academy. Before reaching the academy, he promised himself and his friend, Junko Hattori. That, they would make the world a better place. There’s one little problem with that; he’s destined to become the Demon King.

Rumors spread, and fear settles in among the students. Even his friend Junko hesitates to get close. Will Akuto prove that he can be good or never run from the red string of fate?

Similarities: Anime like Blue Exorcist, Both Rin and Akuto were born into their fate of becoming the greatest evil. Their classmates are uneasy when they find out the horrible truth of the two. And they have to prove to themselves that they are not evil. 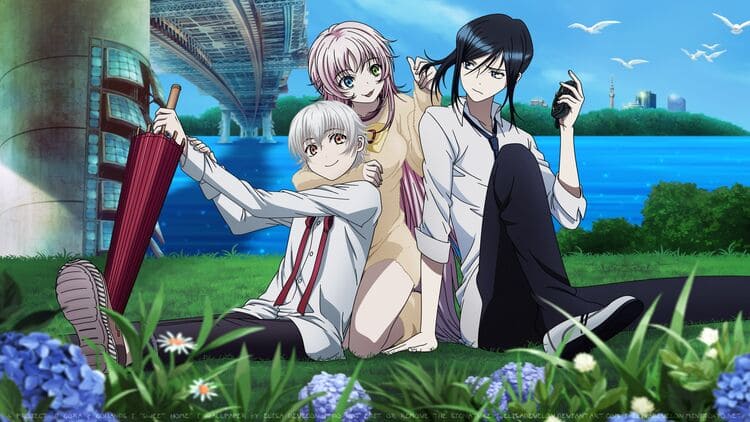 Kings are those with incredible power and can invite people to join their clans. Once in the family, it is the King’s responsibility to protect them. One night, a video of a Red Clansman murdered goes viral, the face looking similar to Yashiro Isana.

Now Manhunt starts a search for his head, not only from the Red Clan, though. He runs into the infamous “Black Dog” Kurou Yatogami, and he has to prove his Innocence to survive!

Similarities: Both Rin and Yashiro are unaware of their situation until someone comes after them. They were trying to prove their goodwill and prove that they belong in the world. To do so, both of them seek out the help of their friends and allies. 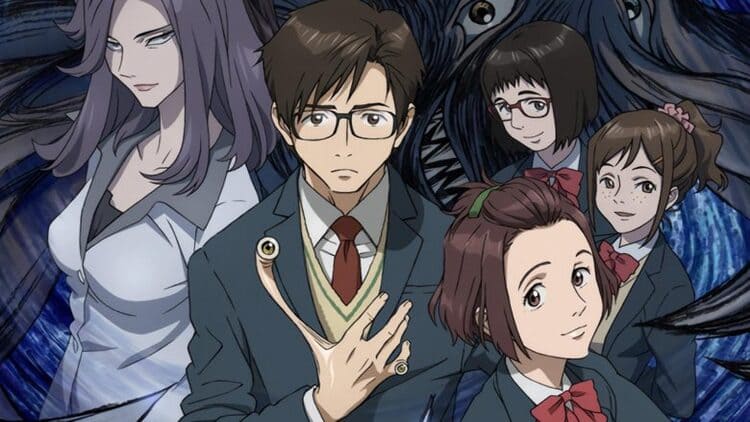 Worm-like aliens have arrived on Earth and infiltrate the human population. They enter humans, usually either through their ears or noses. But one had trouble taking over Shinichi Izumi. He was wearing headphones when one tried entering his ears in his sleep and ended up in his right hand instead.

Both Shinichi and the parasite, Migi were able to keep their minds. Using this, they thrown into survival. Shinichi wanted to fight the parasites. He was starting his and Migi’s quest of working together.

Similarities: Both Rin and Shinichi struggle with inner evils anime like Blue Exorcist. They never asked for or had any control over it. This devil forces them to keep half of who they were—a secret from everyone instead of getting help from friends or allies. 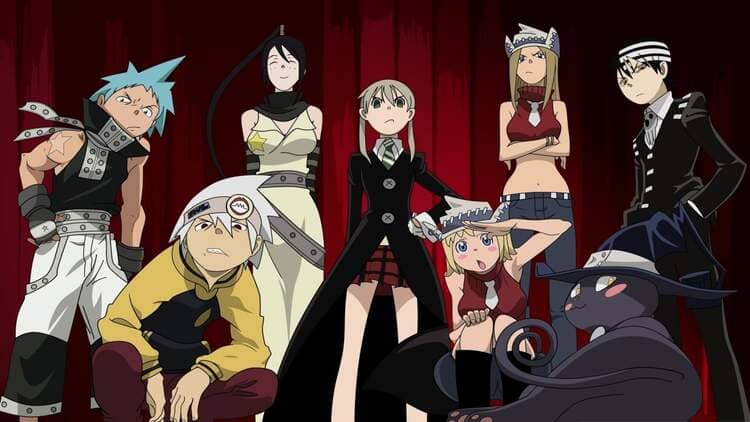 Shibusen, an academy ruled by Shinigami-Lord Death, located in Death City. The goal of the school is to raise Death Scythes for the Shinigami to wield in battle. These weapons made from humans who can transform their bodies into weapons. And can only become a scythe after consuming 99 evil beings and a witch soul.

Soul Eater focuses on Soul, a weapon that tries to act cool, with his partner Maka Albarn. Then there is the hot-headed ninja, Soul Star. And his caring weapon, Tsubaki.y, Lord Death’s very son, Death the Kid (who is OCD).

With his weapons Patty and Liz drive him crazy. Their human forms look different, their weapon versions are the same.

Similarities: Both Blue Exorcist and Soul Eater take place in a school setting. And are set around training them to fight against evil. Both have some funny moments, but it isn’t overwhelming to the action or plot. The main characters also struggle with having some demon side or one inside them. 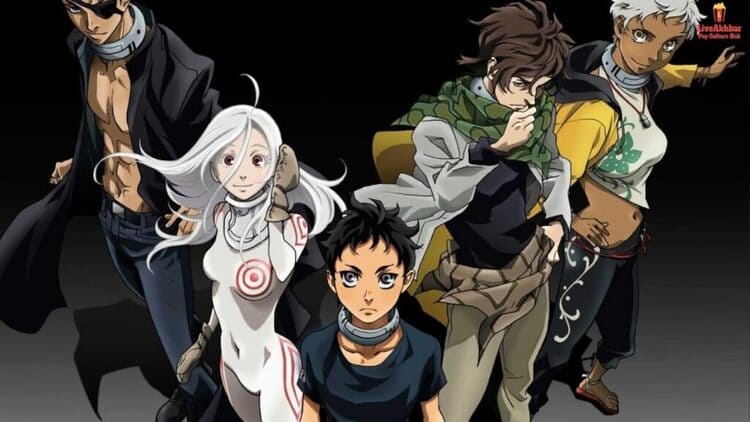 Ganta Igarashi’s class plans to trip to a prison called Deadman Wonderland, Where the prisoners perform for the audience. And don’t exactly do the safest tricks. When a man in red appeared and interrupted the class, everything changed.

Ganta was the only survivor, making him the primary suspect for the death of his classmates. He sentenced to death and sent to the very prison the class was going to visit in Deadman Wonderland.

Similarities: Rin and Ganta both go through the experience of learning. They have a strange power that makes them different. Yet, Ganta doesn’t have the luxury of keeping him a secret, not if he wants to lose a body part.

The main characters also swear to use their powers for revenge, as they have both lost someone dear to them. 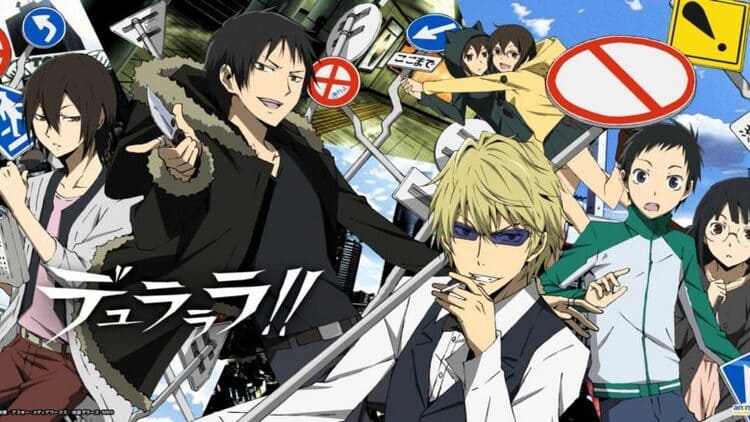 There’s never a dull day in Ikebukuro, a commercial district in Tokyo, Japan. They featured a cast you’ll want to know (and will get to know) more and more in-depth.

Many characters have their daily run-ins with each other. And somehow always manage to yield chaos. Though among others (think stalker girlfriends, “back-alley” doctors, gang leaders, and even a motorcycle-riding Dullahan!).

The series focuses on Mikado Ryugamine. A boy who moves to an already unstable Ikebukuro attends school with childhood friend Masaomi Kida. Everyone has their secrets.

Similarities: Okay, going to admit, there are some significant differences between Durarara!! And anime like Blue Exorcist. Some similarities are they both focus on the supernatural—Blue Exorcist on demons and Durarara on myths/legends. 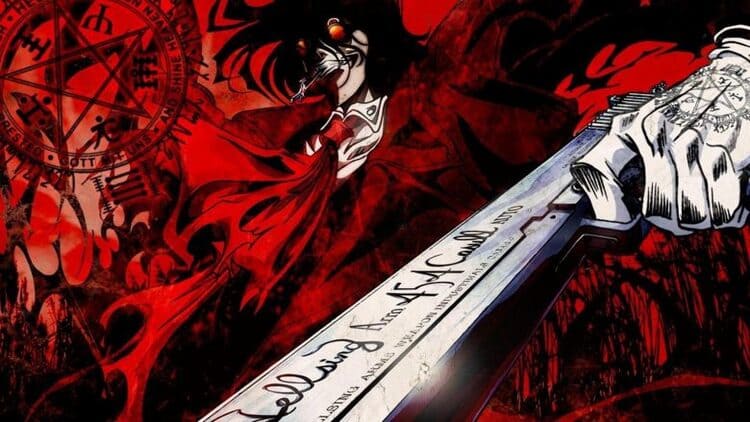 In a world where vampires exist, they are eating any prey that gets caught in their fangs. Fighting against the undead is the Hellsing organization. Who dedicate their existence to destroy any threat to humanity.

Leading the organization is Integra Fairbrook Wingates Hellsing. They are Commanding a powerful military and fighting against the vampires. In her army lies the ultimate weapon, a vampire named Alucard. He fights against his kind as he obeys his commander.

Alucard and his new vampire servant, Seras Victoria, must battle anyone who dares stand against Hellsing.

Anime like Blue Exorcist, or Hellsing Ultimate Both series have the main characters towards eliminating them. Anti-vampire organization and school of exorcists.

5. Owari no Seraph (Seraph of the End) 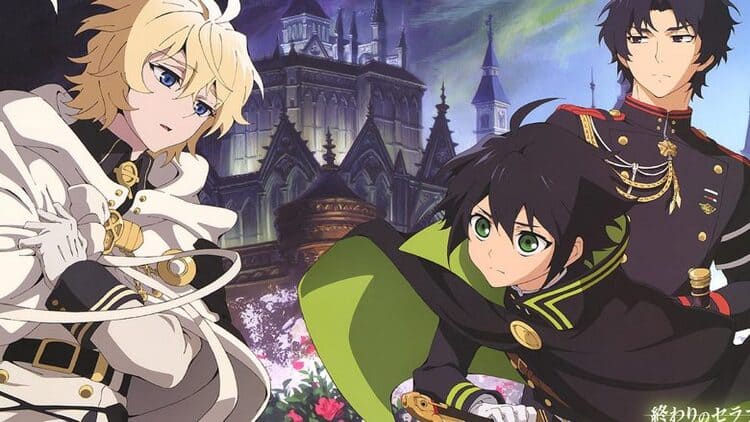 A mysterious virus appears out of nowhere, killing anyone above the age of thirteen. Vampires seem, enslaving the young ones. By promising to protect them in exchange for their blood. Among the survivors are two young children from the orphanage, Yuichiro and Mikaela Hyakuya, and other children.

Tired of enslaved to vampires, Mikaela forms an escape plan, which fails in the end. The only survivor is Yuuichirou, who manages to escape to the outside world. He joins the Moon Demon Company, a unit formed to end the vampires in Japan.

Similarities: Before their own eyes, the main characters lose their family. Rin lost his father, Yuuichirou lost Mikaela and the other children. They haunted by this moment in time, unable to do anything. They join a setting dedicated to eliminating their enemies.

Related:  Popular Girl Falls In Love With An Unpopular Guy

4. The Devil is a Part-Timer! (Hataraku Maou-sama!) 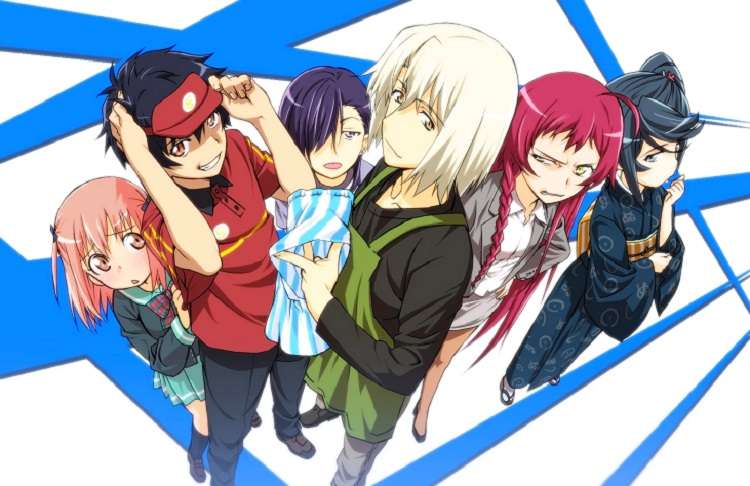 The Demon Lord Satan starts his quest to conquer Ente Isla with his demon army. Unfortunately for Satan, his plans fall apart when the hero, Emilia, appears. Her appearance forced Satan and Alsiel to retreat to the gateway to the human world.

He vows to someday return to Ente Isla to complete his quest if they can find their way back. *Note: Satan and Lucifer are different people in this anime.

Similarities: Both series involve a character that isn’t human living on Earth. They can learn more about themselves and the world. As Rin didn’t know demons existed until recently. There are parallel worlds in both series—one of the humans and one of the demons. 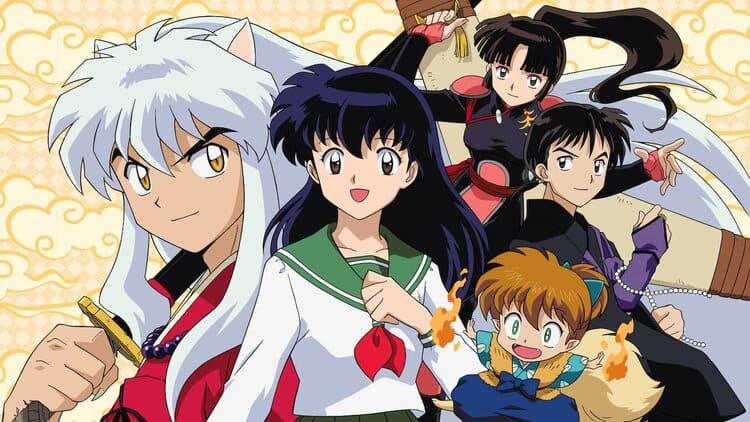 Kagome Higurashi is a fifteen-year-old girl living everyday life until a demon dragged her inside the Bone Eater’s Well. Kagome threw 500 years into the feudal era. Shortly after arriving. She learned the Sacred Jewel of Four Souls was inside her body and was targeting by demons.

After shattering it, Kagome and Inuyasha must start their journey to gather the fragments. Before they fall into the wrong hands. Joining them on their quest are the fox-demon Shippo, the monk Miroku, the demon slayer Sango, and let’s not forget the flea, Myoga.

Similarities: Rin and Inuyasha are half-human and half-demon and judged because of it. Feeling like they have nowhere to belong, both are hot-headed and can lose their temper at times. Both of them picked the human side and fought with their friends to achieve their goals. 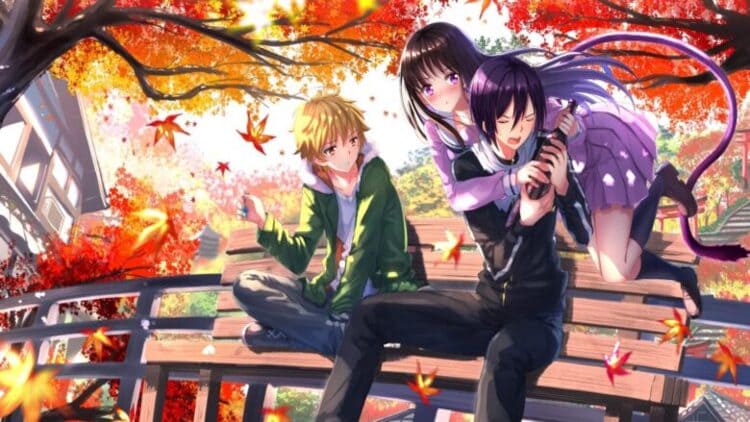 Yato is a god who dreams of having millions of worshipers. But there’s one small problem. He has no shrines of his own to make his goal far from achieved. He does odd jobs every day for five yen.

But things go downhill when his weapon is fed up with his behavior and decides to leave him. His luck changes when a human girl, Hiyori Iki, takes a hit from a car to save him. She somehow survives, but her Soul can leave her body. Yato isn’t able to help her without a new weapon, so she decides to help him.

Similarities: Both series focus on the magical setting. Anime like Blue Exorcist focuses on demons, and Noragami focuses on gods. Yato isn’t exactly the greatest with people, like Rin, whose social skills could improve. 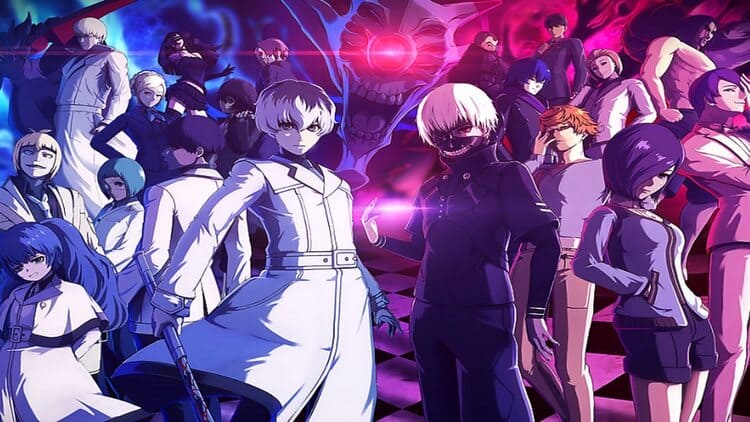 In the world of Tokyo Ghoul, there are humans, and then there are ghouls. Humans live in fear of bloodthirsty monsters, but they don’t know who to trust. Ghouls can blend in and live among humans.

The series follows Ken Kaneki, a student who happens to be a bookworm. He attracted to Rize Kamishiro, who also happens to be a reader. Unfortunately for Kaneki, Rize turns out to be a ghoul and his entire life changes.

Yet, he survives after undergoing surgery, but he now lives as a half-ghoul/half-human.

Similarities: Anime like Blue Exorcist, Tokyo Ghoul, Rin, and Kaneki started off living as ordinary humans until their fate took a sharp turn. Rin finds out he is half-demon, while Kaneki attacked and becomes half-ghoul. Knowing they can’t live as both, they have to keep their demon/ghoul part a secret, or they could end up dead. 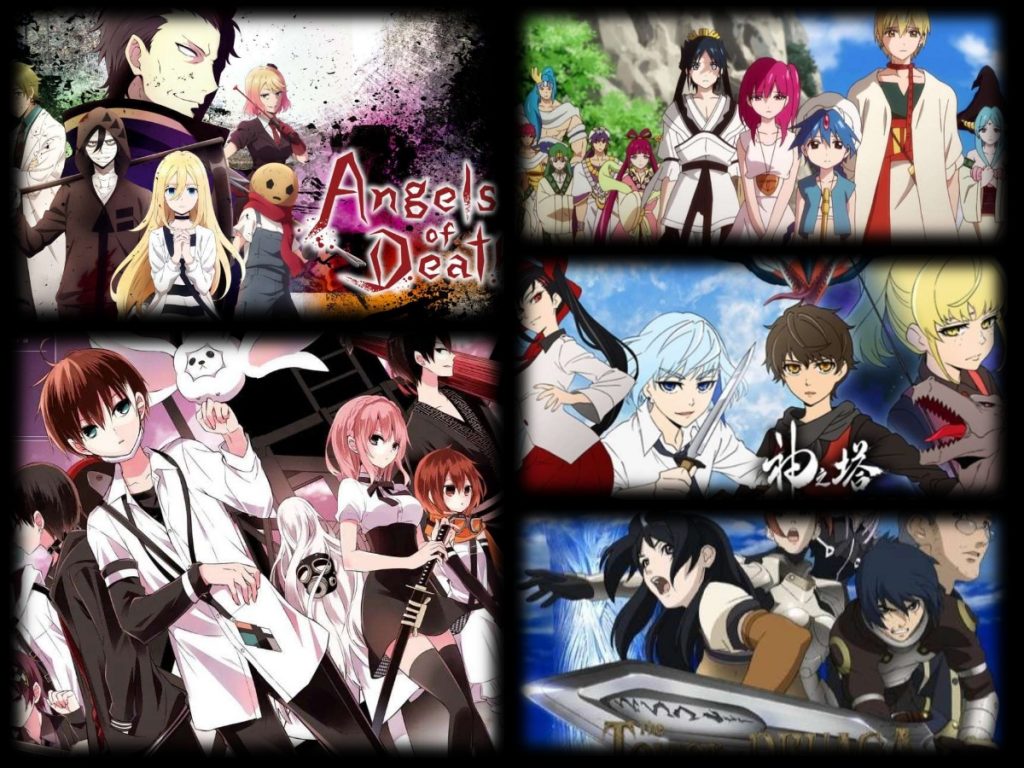