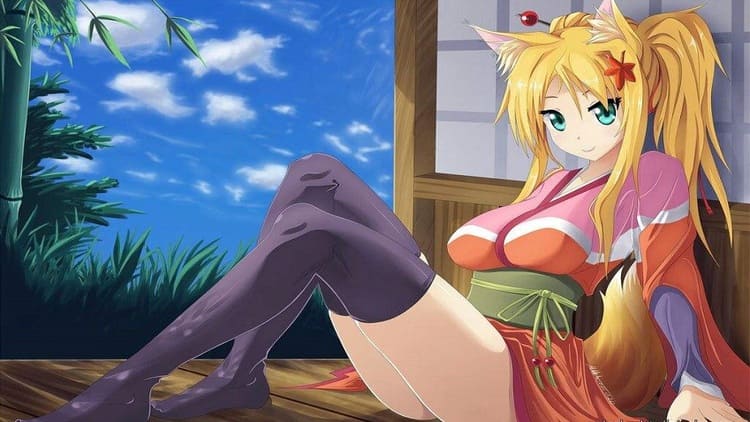 We have compiled a list of female cute anime fox girl fox anime or cute anime kitsune girls anime that will ease your craving for them. If you haven’t done your homework by now, the Japanese word “kitsune” means fox.

Throughout Japanese folklore, kawaii cute foxes are shown to be wise and live on for many generations. At the same time, wielding powers that prove them to be pretty formidable beings. Though some deities in anime girl kitsune do not have a gender.

You can find depictions of kitsune in anime as “Kemonomimi,” meaning “animal ears.” That contain characters shown as beautiful fox girls (bishojo) or kitsune. Depicted as handsome men (bishonen).

Are you ready to be overwhelm by cuteness and forced to make a new waifu decision? I hope you are because, with this list, you will need to brace yourselves.

Both these cute anime girl kitsune roll together as one and can often be found together. Clinging to someone, they find exciting or someone they seem to have a fondness.

Bonbori and Hozuki are twin sisters who are always dressing the same. And tend not to listen to anyone but their own opinions and ideas.

Beautiful yet very childish twins enjoy playing games like hiding and seek. And like to cause trouble among people by pretending to be one another.

Contrary to the belief that all fox/kitsune girls need to be cute. Tamamo is a very mature and voluptuous fox girl that can seduce any man with her seductiveness. The all-powerful Tamamo-no-Mae and the hot springs hotel manager.

Tamamo Yu blends in as a human with her black yukata and beautiful appearance. On occasion, or when her hot springs hotel business in the mountains isn’t doing so well.

You can find her at the beach, working at the restaurant, Tamamo Ya a cute fox girl anime.

Can erratic and bold half-demon girl, Zakuro, is the type to protect what means most to her, which includes her friends. She has some impressive fighting skills. Wielding a cherry blossom tree branch that can turn into a dagger and used for battle.

Even though she is quite a fighter and was born into a family. she has yet to control the divine power that she has in her arsenal, with her powers out of control. And relying on her impressive fighting skills alone.

Zakuro aided by her companions, Susukihotaru, Hozuki. And Bonbori, to assist her in battle.

Although she may look like a normal high school anime girl with fox ears. Chizuru Minamoto is a 400-year-old blonde kitsune spirit. That is living in the human world to attract the attention of Kouta. With the capability of turning into her kitsune form.

She can transform into a human by day and become an all-powerful kitsune by nightfall. Her abilities include, but are not limited to.

Releasing blue flames that her kitsune form allows her to control and use fusion with Kouta. Giving her the means to set free her 5-tailed kitsune power.

The Biscotti Knights Secret Squad’s pride is that Yukikaze Panettone’s cute blonde fox girl is a formidable member. Who looks to her comrades as a family. Her respect goes out to the one she looks up to the most: Brioche, who she addresses with respect.

With the ability to wield daggers, bows, and shuriken. Yukikaze uses her quick movements to take down her enemies. And can stop even the strongest enemies in their tracks.

Koto anime girl with fox ears, Demon World’s mascot and commentator of the Dark Tournament is a girl whose love for brutal battles knows no bounds. She is a cheerful and strong-willed fox girl. Who enjoys the sight of seeing fighters bloody, battered.

And engaged in vicious assaults on each other throughout the Dark Tournament. Though a hard worker and a girl who enjoys her job. She works for villains that run the tournament from behind the scenes.

Susukihotaru, a half-demon worker for the Ministry of Spirit Affairs. She is an adorable sexy anime fox girl who refrains from making eye contact with humans. Her ability to feel people’s emotions or anything.

She touches her, a unique half-demon and half-spirit fox girl. Once she partnered up with Riken, she opens up more to everyone and is not as afraid of humans as she once was.

In a universe predicated on Chinese mythology, Dakki acts as the main villain. She represents being an evil kitsune siren using the emperor. Such as, for instance, a puppet of him to see her sinister objectives of total control to fruition.

At the same time, she calls the shots from behind the scenes, manipulating. She’s as powerful as she is gorgeous and utilizes every means of workable to her advantage. Foxes aren’t constantly benevolent in anime. Dakki is a cruel foe and a little sadistic, taking great pleasure in the suffering of others.

This sexy anime fox girl woman is not a demon but an ancient one, and time has made her a very competent and foe that is formidable. She can choose to take the bodies of female people to occupy instead of showing her real, effective kitsune type.

Shiro is an anime white fox girl or anime kitsune girl with white hair with long locks that are white-silver ears and end, besides red eyes. She also sports two red stripes on both of her cheeks. Shiro wears an extended gown that is white.

A half-moon using one part gives away one of her legs and black hose and shoulder-length gloves. She has a red scarf that is ribbon-like around her back.

Yoko is an Inukami that is problematic and is truly a sexy kitsune into the anime. Inukami is a spirit dog. No demon tamer has tamed her, except Keita. But, her solution to the tamer could be the total results of determining to provide him.

Yoko has two abilities that can be primary. The first is Jaen, where she shoots a strand that is coiling away from her fingertips. There’s also dai-Jaen, which is a larger, more variation that is effective. The power that is 2nd Shukichi, an ability that allows her to teleport objects.

This woman is terrified of normal dogs. However, she is generally speaking fearlessly, when confronted with wicked spirits. During a getaway from Hake, she came across little Keita, who was with her. Which became one of her favorite things along with her for three days, and she shared his chocolate cake.

For this reason, she desired to be Keita’s Inukami to produce an agreement with him. Yoko has emotions for Keita, and she gets enraged whenever he flirts along with other girls.

Sakura is short of having nine tails and must eat a kitsune soul that is effective to become complete. She looks like a teenager. This pretty but kitsune that is incomplete to the Hyper Police Company within the hopes of eating Natsuki.

Sakura has violet hair that is long perky fox ears. Her tails, which can be incomplete, are the result of her being half fox and half-human. Being a skilled fox, Sakura can travel by having a little bit of electrical energy. Irrespective of these capabilities, this law enforcer kitsune anime girl has a great settlement.

Sakura is designed for cash with utmost care and can win a successful swap. Later into the anime, she becomes a spouse with three kids. Beautiful and sexy, this beautiful lady is a good and skilled marksman.

Kuugen is a kawaii cute fox deity that used to become the Guardian of the Mizuchi family. Kuugen is sealed away with a Water Priest owing to her naughty behavior. She was freed by Noboru when a demon had targeted her and currently is their Guardian.

She becomes a man or woman at any time. But utilizes the pronoun ore to refer to herself, which males in Japan can utilize. Though into the past, females did make use of the pronoun also.

Kuugen fox girl anime attracts a fair bit of attention due to her blonde hair, blue eyes, and fox ears, which have become included in a hat. Whenever out in public areas, they are without a cap though she can also hide.

Lily was one-half of the two sprites delivered by Winged Cloud. she is a cute anime fox girl. Lily quickly grew inside the community, becoming the icon that is the biggest in the fanbase.

Inside the first few months, there was over a huge selection of renditions of Lily, which were drawn by the fans, not to mention the renditions of Lily. That edits her original sprite, which displays different feelings, stances.

Noble built lore of types around Lily. On many occasions, he goes live, and she both edits videos and tending to his Twitch behind the scenes.

Senko can be an 800-year-old kawaii cute fox girl anime delivered through the natural world to reduce Kuroto from his overburdened and frustrating life. This kitsune anime girl goes far above for Kuroto, such as pampering him, cleaning and cooking their house.

Senko moves into Kuroto’s home and acts like a spouse that is a helpful mom. Senko wants to pamper Kuroto, such as cleansing him. Therapeutic massage, grooming, and offering him lap pillows to ensure he gets to rest.

She gets unhappy if Kuroto prioritizes his health. To her dismay, Kuroto seems to have a fixation on her soft end that is fluffy ears.