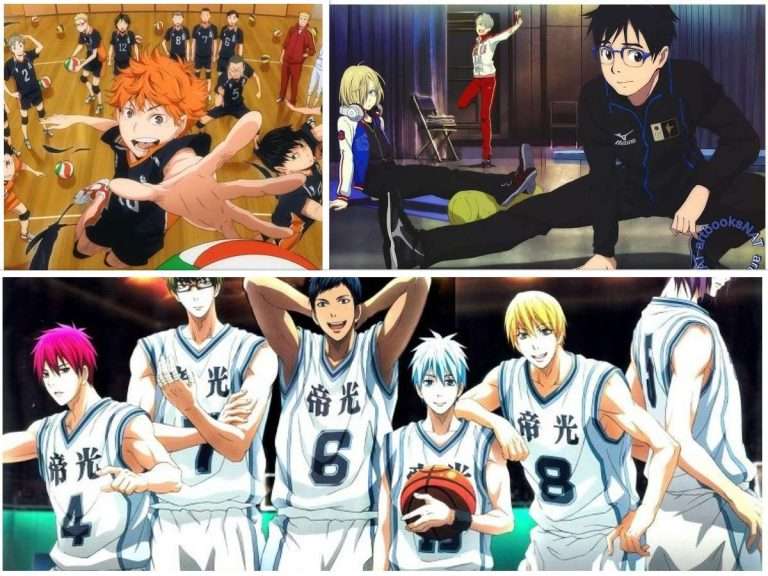 The top 10 sports anime and there’s literally something for everyone who has a different sporting interest. It may not be the same as seeing your real-life players. The following anime stayed true to the spirit of their respective sports. so get yourself hydrated and do your stretches because this list is gonna work you out.

Yamauchi pedal is an anime by TMS entertainment that features the sport of competitive cycling but funnily enough. The protagonist of this anime Sakamichi Onoda didn’t start off initially wanting to be a cyclist see the premise of this anime is that, he was an otaku who wanted to join his school’s anime club only to find out it was disbanded. and then tried to revive it on his own. Now when that was a bust he went on a round trip on his custom-built bike, which caught the attention, and all of his classmates Shunsuke being the cyclist enthusiast that he challenged Sakamichi to a race on the promise that he’d joined the anime club if he won from there the boys combined determination sets them on a ride to glory.

9. Ballroom of dance ( Welcome to the Ballroom )

We take center stage with some dancing now, bet a lot of you are surprised to see welcome to the ballroom but believe it or not dancing is in fact a competitive sport with styles ranging from square dancing to breakdancing to the traditional dances of various indigenous people, This is actually a universal sport but we’re talking about a particular style of dance here and that is ballroom dancing.

A shy middle schooler who’s happiest, when he goes unnoticed, thought was being picked on by some bullies. When the dashing professional dancer Kaname may come in to save him. He even invites the boy to visit his esteemed dance studio and shows off his skills with that chance encounter that Tatara who was initially unmotivated with his life finds his calling and begins to put his best foot forward along with fellow classmates Shizuku to become a professional dancer.

You have to walk before you can run and if you tumble you got to pick yourself up and get back in the race this saying is pretty much the premise, and life story of one next main protagonist Kakeru Kurahara is a down-on-his-luck former ace runner of Sendai Josei high school. From losing his apartment deposit in a polo game of Mahjong to being caught shoplifting at a convenience store things aren’t going great for Kakeru, but when a fellow university student named Haiji sees the former aces agility in action, he offers him a place to stay at an apartment along with eight other students to which Kakeru accepts only to find out it was a bait, and switch plan by Haiji to get him to join the university track club and participate in the grand marathon, but the issue is the other six residents in the apartment aren’t only complete running novices, they don’t even want to participate in the race. It’s an anime where dreams are neck and neck with reality as Haiji strives to realize his dream to enter the marathon while Kakeru works to regain his fire.

Now it’s time to get our arms in shape with a bit of good old-fashioned featherweight, originally made in the golden anime era of 2000. Hajime no Ippo or fighting spirits in the English title is a real good coming-of-age underdog type boxing anime, before he found the ring young Makunouchi Ippo was a meek weakling that couldn’t defend himself and was always running errands for bullies, who would later beat on him. He didn’t want to change himself but he wasn’t sure how, and one day when he’s saved from his bullies by a famous boxer known as Nakamura this encounter stirs up inspiration in him, and it for asks the Kimura to train him in boxing, however, the boxer doesn’t think it for has what it takes to become a fighter and gives him an impossible task to complete within one week driven to become stronger for himself. Ippo sets off on an empowering journey that will change him for the better as he punches his way to the top of the box in food shape because just like they say true strength comes from within.

Yuri on ice is the very first anime to showcase the sport of figure skating from the dazzling costumes to the emotion evoking reactions of the characters to the ethnically diverse cast of skaters from around the globe. MAPPA Studios delivered a well-received new anime to the sports genre as per the title this anime is about Japanese ice skater Yuri, who suffers a great loss at the Grand Prix and loses his drive and his figure due to his depressive eating of his family’s delicacy of pork cutlets. Anyway upon returning home to re-examine his options a video of Yuri performing a skating routine done by five-time Grand Prix Champion Russian figure skater victor goes viral, so viral that it reaches the eyes of the champion skater himself charmed by Yuri skills and seeing great potential in him. Viktor takes it upon himself to become the Japanese skater’s coach and whip him into shape in order to win the next Grand Prix. Now it’s not an easy road but with support from his friends, family, and his renewed passion burning bright Yuri’s determined to make the most of his second chance with the gold.

A baseball anime came along and that anime finally came in the form of diamond no ace. This series follows the life of a left-handed pitcher named Eijun Sawamura in his middle school baseball game. His team suffers a crushing defeat, when the batter misses history pitch the team vows to reach the national tournament in high school and is approached by someone, who may allow him to fulfill that vow a scout from the Tokyo’s prestigious Seidou high school invites to join the school after taking notice of his unique style pitching after being encouraged by his classmates the southpaw pitcher agrees though, he feels a bit out of place being among such skilled baseball players vows to become the ace of the team but he has a rival for that title in Satoru a right-handed power pitcher, whose breakneck fastball throws earned him a spot on the starting roster but Eijun more than ready to step up to the plate in order to become the Ace and you best believe that this anime throws all expectations out of the park.

This particular anime holds a special place in the sports genre because it showcases equal parts of the slice-of-life genre. Once upon a time Haruka, Rin, Nagisa, and Makoto were all best buddies with a shared love for swimming but they all ended up moving away after graduating middle school upon meeting again in high school, Haruka and Rin have a less than happy reunion with Rin viewing Haruka as a rival instead of a friend and proclaiming that he’ll excel beyond him in swimming this pushes the now trio to form a Swim Club to partake in an upcoming tournament. However, they need a fourth member to do so in enters to form attractive member Rei who was recruited by Nagisa with all of the players in place the group forms a close bond as they train hard to become better swimmers, while Rin and Haruka set about settling things between each other be ready for a lot of blood sweat and tears in this inspiring sporty slice-of-life anime.

3. The Prince of Tennis ( Tennis no Ouji-Sama )

Considered the sport of kings of Prince of tennis started out as a manga they later got adapted into a popular anime by trans arts that debuted in 2001, then came to an end in 2005.
A young prodigy from the West, his name is Ryouma Echizen who aspires to become the greatest tennis player in his country and finally get out of the shadow of his father’s tennis legend. Prince of tennis has a lot of story arcs that showcase Ryouma’s inspiring journey to become a top-tier tennis player. It’s just like seeing a real-life promising player make a name for themselves and just work their way upwards and with the support of his friends and teammates Ryouma is sure to get there.

A universal favorite that’s captured the imaginations and admiration of people everywhere basketball. One of the things that make Kuroko no Basket is such an interesting sports anime to watch is how unlike the majority of protagonists in sports anime Tetsuya isn’t incredibly athletic like his teammates, he doesn’t even shoot to score any points. When he plays due to him being much shorter than many other basketball players, however, what he lacks in strength and height, he makes up for with his ability to move around the court unnoticed in addition to his uncanny skill at passing the ball to other players that can shoot without fail this earned him the name of the phantom Sixth Man during the time, he was a part of the championship junior high basketball team known as the generation of miracles before he parted ways with the team after graduating. Now Tetsuya attends theSeirin high school along with another new recruit fresh from the US, known as Taiga Kagami, who’s a very strong basketball player combined with Kagami’s prowess and Tetsuya’s unsurpassed passing they become a force to be reckoned with as they shoot for the stars to become the very best.

Haikyuu! often viewed as an unassuming beachside game for families volleyball has a lot more contact and effort put into it than. This sports anime is about Shouyou Hinata who despite being on the short side to jump to heights that almost exceed the level of his love for volleyball this love was so great that Hinata not only revived the volleyball club in his middle school, he actually managed to bring his team to a tournament sadly they didn’t get far, when they got dealt a harsh defeat by the king of the court known as Tobio Kageyama, swore that he would surpass Kageyama and work even harder to improve his volleyball skills. Years later he goes on to join the volleyball team of Karasuno high school and is stunned to see none other than his sworn enemy Kageyama is one of his teammates. Initially, the reuniting rivals get along as well as say a mongoose and a cobra eventually though they stopped to take a moment to find some common ground to work together and later managed to become friends. Haikyuu boasts superb and exciting animated playing scenes on the court, as well as impactful emotional moments off it. The series proves no matter how many times you get beaten you can always get better.